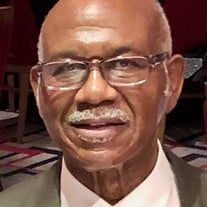 Eugene Ragland was born June 7, 1946, to Mr. Earnest and Earnestine Miller Ragland in Gadsden, Alabama. As a child and throughout his life Eugene was known for loving nature, including handling pigeons and catching snakes to watching nature shows. Eugene graduated Carver High School in 1965. After graduation, he enlisted in the US Navy. In 1969, he returned to Gadsden and began working at the Goodyear Tire and Rubber Plant. He met the love of his life, Gwendolyn Wilson, and they were married on June 20, 1970. They were blessed with three sons-Patrick, Sheldon and Kenneth. Eugene loved being a husband and a father. Although he was known as a hard worker and wonderful provider for his wife and children, Eugene's proudest accomplishment is his dedicated and committed relationship to his God Jehovah. In 1976, Eugene symbolized his dedication by way of water baptism. He was proud to be called a Jehovah's Witness. Eugene worked hard in his service to Jehovah and had the privilege of serving as an elder in the congregation. He regularly shared what he learned from the Bible with others in the ministry. He also enjoyed chauffeuring many friends in the ministry and to conventions. In his spare time, he would go to work in the kitchen baking up his famous cakes. He put special time and effort into his baked goods. He was well known for his Red Velvet, German Chocolate and Pound Cakes, as well as sweet potato pie. The brothers and sisters in the congregation would eagerly wait for Eugene to take off the lid of the cake plate because they knew that each bite would be delicious. Eugene also enjoyed traveling. He even traveled to South Africa. One highlight of that trip was going on a safari where he was able to enjoy nature up close! Affectionately known to many as "Punkin", Eugene was an avid sportsman enjoying all types of sports, but his favorite hobby was fishing. He loved his rod and reel, sitting peacefully on the fishing banks, and reeling in the fish. Eugene was always ready to set up the card table for a game of Bid Whist where there was plenty of good friends, family and laughter. He enjoyed being with friends and family. He especially loved spending time with his grandchildren and great-grandchildren. Sadly, Thursday, September 30, 2021, Eugene's life came to a sudden end. He is preceded in death by his parents, Mr. Earnest Ragland and Mrs. Earnestine Miller Ragland, and two brothers, Jackie L. Ragland and Anthony Ragland. Eugene is survived by his loving and devoted wife, Gwendolyn Ragland; three sons, Patrick R. Ragland, Sheldon M. (Mackele) Ragland, and Kenneth L. (Taria) Ragland; four sisters, Debra (Naplah) Naplah, Beverly (Shawn) Key, Belinda Ragland, and Cassandra Watkins; two brothers, Dewayne (Beverly) Ragland and Timothy (Lanice) Ragland; five grandchildren, Sheldon (Gracie) Ragland II, Patrick Ragland, Jr., Benaiah Ragland, Raphael Ragland, and Marissa Ragland; two great-grandchildren, Brayden Ragland and Presllee Ragland; three aunts, Patricia (Ernest) Williams, Mary Francis (Leon) Harville; one uncle, Fred Miller; several special friends; and a host of other relatives and friends.

Eugene Ragland was born June 7, 1946, to Mr. Earnest and Earnestine Miller Ragland in Gadsden, Alabama. As a child and throughout his life Eugene was known for loving nature, including handling pigeons and catching snakes to watching nature... View Obituary & Service Information

The family of Mr. Eugene "Punkin" Ragland created this Life Tributes page to make it easy to share your memories.

Send flowers to the Ragland family.