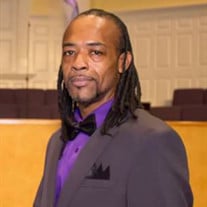 Eldexter Deon Truss, 55, was born on April 22, 1966, to the parents Houston Morris and Dorothy Barclay in Talladega, Alabama. Eldexter was given the blessing of having two fathers in his life after the union of Henry and Dorothy Truss, Sr. At an early age, Eldexter accepted Christ as his Lord and Savior and united with Mt. Zion CME Church where he faithfully served as the treasurer and a trustee until his health began to fail. Eldexter received his formal education in the Talladega County School System and soon thereafter, he attended Central Alabama Community College earning a trade in Auto Body Repair. Eldexter enjoyed working on cars, attending car shows, and drag racing. He received several awards from the car shows he participated in. After Eldexter received his trade, he began his own business, "Triple D Auto Repair Shop". This was his passion and where he spent most of his time. He loved working with the Talladega County Board of Education at Stemley Elementary School and driving the bus for approximately 20 years. Along Eldexter's journey, he met and married Mrs. Bridgette Truss and to this union they were blessed with three wonderful children, Eldexter, Jr., Decorius, and T'Keyliah. Eldexter, known to many as "Dex", was a very outgoing, enthusiastic, energetic, fun loving person who enjoyed entertaining his family and especially his grandchildren, Skoot and Jaxon. His grandchildren meant the world to him. On Saturday, July 17, 2021, Eldexter was called to his eternal resting place joining his father, Houston Morris. Loving memories of Eldexter will forever be remembered and cherished by his two sons, Eldexter (Andrea) Truss, Jr. and Decorius Truss, Sr.; his daughter, T'Keyliah Truss; mother Dorothy Truss; five sisters, Donna (Alex) Gilbert, Dataska (Wayne) Smith, Shavon Morris, Latonja (Thaddeus) Martin, and Sharon Storey; five brothers, Kristopher (Kimberly) Reynolds, Michael (Veronica) Turner, Myron (Toye) Calhoun, Henry (Pearl) Truss, Jr. and Frank (Claudia) Chatman; two adorable grandsons, Decorius "Skoot" Truss, Jr. and Jaxon Truss; stepmother, Lavonne Morris; stepfather, Frank Truss; extended family friend, Tonett Wells; special friends, Detric Gooden, Bernard Ellington, Gerald Lawler, Cedric Wilson, and Roy Wilson; and lastly, one feisty GRANDDOG, Bentley; and a host of cousins, nieces, nephews, other relatives and friends. Eldexter will truly be missed in his community, by his friends, loved ones, and by all the hearts he touched.

Eldexter Deon Truss, 55, was born on April 22, 1966, to the parents Houston Morris and Dorothy Barclay in Talladega, Alabama. Eldexter was given the blessing of having two fathers in his life after the union of Henry and Dorothy Truss, Sr. At... View Obituary & Service Information

The family of Eldexter Truss, Sr created this Life Tributes page to make it easy to share your memories.

Send flowers to the Truss family.