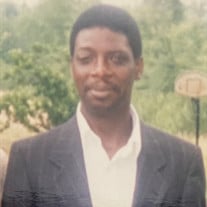 Edward Earl Smith was born on February 16, 1956 to the late Cecil and Catherine Cunningham Smith in Talladega, Alabama. On Tuesday evening, the 12th of January 2021, Edward transitioned from this walk of life to his eternal home. At an early age, Edward accepted Christ as his Lord and savior and united with Holy Hill Church of Our Lord Jesus Christ where he played the guitar for the choir. He was a 1974 graduate of Talladega County Training School. Upon graduating, Edward worked at Crown Textile in Talladega for several years and later accepted a job at Avondale Mills in Pell City working there until it shut down. When Edward was not working or assisting his wife take care of the elderly, you could often find him on the creekbank fishing. Edward was an avid outdoors man and fishing and gardening was his passion. Upon answering his Master’s call on Tuesday, January 12, 2021 while under the care of St. Vincent’s Hospital in Birmingham, Alabama, Edward was welcomed home by his parents, Mr. Cecil Smith and Mrs. Catherine Cunningham Smith; son, Edward Earl Smith, Jr.; brothers, Connell Smith and Eugene Smith. Edward touched the hearts of his entire family and leaves precious memories that will forever be cherished by wife of 19 years, Ackwadnetta Shealey Smith; two daughters, Tara Cunningham and Renae (Roger) Perkins; one sister, Patricia Smith of Talladega; four brothers, Paul Smith, Alvin Smith, Cedric Smith, and Fredric Smith, all of Talladega; four grandchildren, Talesha Cunningham, Preston “LJ” Cunningham, De’Nyah Perkins, and La’Bryan Perkins; one great-grandchild, Ta’liyah Cunningham; two sister’s-in law, Gloria Shealey and Janet Smith of Bedford, Texas; one brother-in-law, Walter Shealey; .and a host of other nieces, nephews, cousins, and friends.

Edward Earl Smith was born on February 16, 1956 to the late Cecil and Catherine Cunningham Smith in Talladega, Alabama. On Tuesday evening, the 12th of January 2021, Edward transitioned from this walk of life to his eternal home. At an... View Obituary & Service Information

The family of Mr. Edward Earl Smith created this Life Tributes page to make it easy to share your memories.

Send flowers to the Smith family.