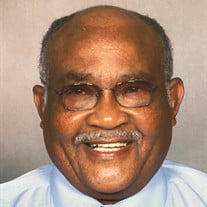 Mr. Edward Emeretus Davis, Sr., affectionately called Ed, was born May 17, 1945, in Alpine, AL to the parentage of Warren M. Davis and Laura Millender Davis. He was one of six children born to this union and the 15th of 17 children of a blended family. Edward confessed Christ as his Savior at an early age and joined Africa Baptist Church, Talladega, AL where he was an usher and sang with the Senior Choir and the Male Chorus. He was a member of the Gospel group "The Spiritual Marvelaires" of Alpine. Edward graduated from Phyllis Wheatley High School in May 1964 and joined the U. S. Armed Forces a year later. He obtained the rank of SP5 before being honorably discharged. During his employment career, he was employed by Kimberly Clark Corp, Protective Life Insurance Company, and Georgia Pacific in Talladega, AL. He also worked with the Talladega County Sheriff's Department as an Auxiliary Deputy and jailer before being employed at the Anniston Army Depot in Bynum, AL from which he retired February 28, 2011. Edward married Deborah Dates and to this union five children were born. Unfortunately, the marriage ended early. Later he was united in Holy Matrimony to Victoria Stockdale with whom he shared 26 wonderful years. His health began failing in February 2021. Realizing he would not completely recover; he chose to spend his last months at home with his wife, Vickie, whom was at his side until the end. Edward lived life to the fullest. He enjoyed playing baseball and served as manager of the Bryant Baseball Team. He was full of laughter and fun and he loved to gently bite babies as a show of affection. He actually loved to bite anyone whom he loved dearly. His laughter rang out spontaneously at the least provocation. He enjoyed growing vegetables and would give them all away to anyone who asked. Gardening was his passion until he couldn't keep it up the way he wanted. He planted his last small garden in 2020. Ed boarded the glory train on Saturday morning, July 10, 2021, waving goodbye to pain and worry. As he greets those gone before, he awaits those whom he left behind. His memories will be cherished by his loving and devoted wife, Victoria "Vickie" Davis, five daughters, Teresa (Carlos Manuel) Davis of Montgomery, AL, Renee (Aaron) Gunn of Wilsonville, AL, Carol Garrett of Montgomery, AL, Kim Stockdale of Talladega, AL and Candice Stockdale of Marietta, GA; three sons, Edward Davis, Jr. and Warren (Ursula) Davis of Vincent, AL and Hubbard (Crystal) Stockdale of Talladega, AL; four sisters, Mary L. Andrews of Cleveland, OH, Myrtis O. Cook of Graysville, AL, LaBlonde (Willie D) Harmon of Stone Mountain, GA, and Patricia (Rev. Tommy) Hardy of Talladega, AL; eighteen grandchildren, nine great-grandchildren, and a host of nieces, nephews, cousins, other relatives and friends.

Mr. Edward Emeretus Davis, Sr., affectionately called Ed, was born May 17, 1945, in Alpine, AL to the parentage of Warren M. Davis and Laura Millender Davis. He was one of six children born to this union and the 15th of 17 children of a blended... View Obituary & Service Information

The family of Mr. Edward Emeretus Davis, Sr. created this Life Tributes page to make it easy to share your memories.