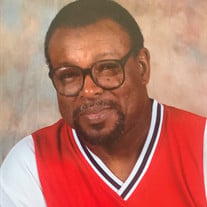 On December 8, 1960, Dwight L. Madden was born to the parentage of the late John L. Madden and the late Annie M. Waites Madden. At an early age, Dwight gave his life to Christ and joined First Baptist Church of Cropwell, Alabama. He was a 1978 graduate of Pell City High School. He later attended Nunnelly Community College in Childersburg, Alabama where he received an associate degree in welding. On August 5, 2020, after being a dedicated employee at Honda of Alabama for 19 years, Dwight retired. During his retirement, Dwight was able to spend more quality time with this family. In his spare time, Dwight enjoyed watching football, with the Auburn War Eagles being his team of choice. Along the path of Dwight's earthly journey, he met and fell in love with his soulmate, Twanda Elston, who soon became the love of his life and on September 5, 1984, the two became one as they were gracefully united in holy matrimony. Together they started a family that was full of love and joy. Dwight loved his family with all his heart and soul, from being the most perfect and compassionate gentleman to his wife, to being the firmest foundation for his kids, and lastly becoming the most unsurpassed grandfather to his grandchildren. Not only was Dwight a loving and caring husband, father, and grandfather, but he was also a great friend, Godfather, Godbrother, and sibling-cousin. He has genuinely touched the hearts of many people and will truly be missed. On Saturday, June 12, 2021, God saw that he was getting tired and called him on to glory to be with him. Once Dwight received his heavenly call, he serenely accepted his wings and took flight joining his parents, grandparents, daughter, Tonya Williamson, and son Darrius Madden. Those left to cherish his memories are his loving and devoted wife, Twanda Elston Madden of Lincoln; two sons, Damian Madden of Lincoln, AL and Cordaryl Embry of Talladega, AL; one daughter, Devin Madden of Lincoln, AL; five granddaughters, Alysa Evans, Aaliyah Madden, Ameriah Madden, Kardia Embry and Kayla Embry, all of Talladega, AL; two grandsons, Kameron Embry and Caesen Embry, both of Pell City, AL; Godsister, Willie Mae Lipscomb; cousins as siblings, Janet (Anthony) Jelks, Alfreda Mays, Jennifer Shepard, Carola Shepard, Chandra Shepard, and Roosevelt Shepard; three Godchildren, Kenneshia (Joshua) Jackson, Demecia Howard, Kendria Perkins; three sisters-in-law, Mertha Person, Juakia Marshall, and Renae (Rodger) Jordan; two brothers-in-law, Darry (Vanessa) Elston and Steven (Wanda) Beavers; two good friends, Eldred Mays and James (Gloria) Hines; and a host of nieces, nephews, cousins, and friends.

On December 8, 1960, Dwight L. Madden was born to the parentage of the late John L. Madden and the late Annie M. Waites Madden. At an early age, Dwight gave his life to Christ and joined First Baptist Church of Cropwell, Alabama. He was a... View Obituary & Service Information

The family of Dwight Lewis Madden created this Life Tributes page to make it easy to share your memories.

Send flowers to the Madden family.