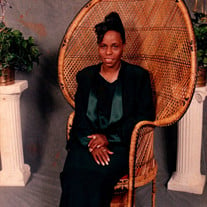 Minister Doris Johnson, 72, of Talladega, Alabama was born on June 5, 1949 to the late Marie Evans and Willie Earl Glover, Sr. in Mobile, Alabama. At an early age, Doris accepted Christ as her Lord and Savior and united with Mt. Pleasant Baptist Church in Mobile, Alabama. She received her formal education in the Mobile County School System where she attended Emerson Elementary, Emerson High, Central and Williamson High School. In 1976, Doris relocated to Talladega, Alabama and began her working career at E. H. Gentry on the campus of Helen Keller. She later began working as a seamstress at Alabama Industries for the Deaf and Blind and after 33 years of being a dedicated and devoted employee, Doris retired and continued serving the Lord and working in his vineyard ministering to his people and spreading the word and love of God. Minister Doris was a loyal member of Faith Temple Ministries where she served faithfully until her passing. Not only was she a member of the choir and the usher board, but she also served diligently as a member of the prison ministry. Minister Doris was affectionately known by her family as "Baby Cake". She was very active and loved to run. She also enjoyed singing and dancing, but most of all, Minister Doris had a heart of gold. She was a friendly, kind-hearted woman with a gentle soul, but you could not mistakenly take her kindness for weakness because Minister Doris said what she meant and meant what she said, and she did not mind getting you straight if you stepped out of line. She will truly be missed by all the hearts she has touched and lives she encountered. After God blessed us with Doris for 72 long earthly years, her journey was completed on January 1, 2022 when she was called home call for eternal rest while surrounded by loved ones and in the care of Brookwood Citizen's Baptist Medical Center in Talladega, Alabama. Once gaining her heavenly wings, she was reunited with her parents, Marie Evans and Willie Earl Glover, Sr. and brothers, Melvin Glover and Willie Earl Glover, Jr. Doris's loving memories will forever be remembered and cherished by her two sons, James Johnson and Anthony (Nancy) Johnson; her twin sister, Dolores (Harold) Glover Brown; five grandchildren, D'Anthony Johnson, Domanic Johnson, Chloe Johnson, Grace Johnson and Devin Johnson; two great-grandchildren, Raveyia Johnson and Maijor Johnson; and a host of other relatives and friends. Doris will always be remembered for her love of others, her humor, her loyalty, and her kind heart she had.

Minister Doris Johnson, 72, of Talladega, Alabama was born on June 5, 1949 to the late Marie Evans and Willie Earl Glover, Sr. in Mobile, Alabama. At an early age, Doris accepted Christ as her Lord and Savior and united with Mt. Pleasant... View Obituary & Service Information

The family of Doris Johnson created this Life Tributes page to make it easy to share your memories.

Minister Doris Johnson, 72, of Talladega, Alabama was born on...

Send flowers to the Johnson family.