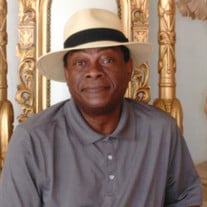 Mr. Donald Lauderdale, 62, was born on September8, 1958, to the parentage of Addies Lauderdale and Louise Rhoden. At an early age, Donald accepted Christ as his Lord and Savior and united with Ebenezer Baptist Church. Donald received his early childhood and adolescent education in the Calhoun County School System and was a graduate of Anniston High School Class of 1976. After high school, Donald decided he wanted to serve his country and enlisted in the United States Army consecrating 4 years of dedicated service. He received several decorations, medals, badges, commendations, citations, and campaign ribbons while serving his country. He was stationed in Denver, Colorado and because of the beautiful mountain views and hiking trails, he would make this his home for more than 30 years after serving his country in the US Army. He became an accountant and worked in Business Administrations for more than 20 years while in Denver, Colorado. Donald later relocated to Atlanta, Georgia continuing his expertise in accounting and Business Administrations for 10 years. It was at this time in Donald's life he felt it was time to moved back home to Anniston, Alabama to be closer to his family. Donald loved his family and enjoyed plants and planting, but most of all Donald had a passion for candles. He burned candles all the time and he would let you know this was his way of peace and relaxation, even if he was visiting you at your home, he wanted to burn a candle. Going to the mountains, camping, and hiking was a joy to Donald and remained a part of his life after he moved back home. He spent a lot of time with his pets and his dogs. On Saturday, August 14, 2021, Donald was called to his eternal resting place joining his father, Mr. Addies Lauderdale, stepfather, Mr. Quencie Morris, Sr., and brothers, William Lauderdale, Patrick Lauderdale, Edward Lauderdale, and Quencie Morris, Jr. Loving memories of Donald will forever be remembered and cherished by his loving mother, Louise Rhoden Morris; three brothers, Jack Lauderdale of Denver, Colorado, Kerry Morris of Birmingham, Alabama, and Anthony Morris of Anniston, Alabama; five sisters, Alice Joyce Lauderdale of Anniston, Alabama, Jackie (Robert) Davis of Munford, Alabama, Patti (Shedrick) Morris of Lincoln, Alabama, Quennita Gilbert of Atlanta, Georgia, and Alice (Pontius) Gay; and a host of aunts, uncles, cousins, nieces, nephews, other relatives and friends.

Mr. Donald Lauderdale, 62, was born on September8, 1958, to the parentage of Addies Lauderdale and Louise Rhoden. At an early age, Donald accepted Christ as his Lord and Savior and united with Ebenezer Baptist Church. Donald received... View Obituary & Service Information

The family of Donald Lauderdale created this Life Tributes page to make it easy to share your memories.

Send flowers to the Lauderdale family.