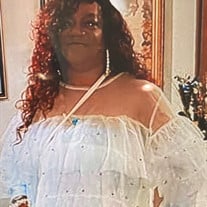 Mrs. Deborah Scott Wells was born to the late Robert C. Miller and Artie Michelle Scott on March 26, 1963, in Talladega, Alabama. Deborah was a true servant of the Lord, and it was proven throughout her earthly journey. At an early age, Deborah united with Ebenezer Baptist Church in Talladega, Alabama where she served faithfully until her demise. She received her education in the Talladega City School System and was a graduate of Talladega High School Class of 1981. Deborah was such an enthusiastic, energetic, and fun-loving person, with an infectious personality and sweet spirit. Upon completing her education, Deborah began her working career in Private Home Healthcare. She worked faithfully assisting many of her elders as this was a perfectly chosen career for her due to her loving and caring heart for others. She loved her job because she LOVED talking to people. It wasn't long before Deborah fell in love and married her soulmate, Frankie Wells, Sr. in October 1982, and to this union birth was given to a loving son, Frankie Jr. and three beautiful girls, Tabatha, Whitney, and Britney. On February 11, 1990, due to God's plan for Frankie, Sr. to become one of his heavenly servants, Deborah was left to raise their four kids as a single mom, which she proved to the world this could be done with the help of God. Deborah's children were the joys of her life. There wasn't a thing in this world she would not do for children. She always made sure their needs came first and they had the best she could possibly give them. She loved having her children and grandchildren around her and seeing them happy is what motivated her in life. Deborah was definitely a people person, the life of the party, and she never met a stranger. She genuinely cared about every person she encountered, all along the way touching people's lives in some way, shape, form, or fashion. Deborah always greeted you with a vibrant smile that would brighten your day, even at your darkest moment and would then start a conversation. She would leave you with an impression you would always remember. Deborah was full of life and was grateful for every moment she had of it, loving and living it to its fullest. Deborah, affectionately known to many as "DEBO" but known to all as "THE FASHIONISTA QUEEN" loved to shop, dress, sing, and socialized. Wherever you seen Deborah Wells, you saw FASHION! She was a flamboyant dresser that had her own style when it came to clothing. Deborah enjoyed entertainment and entertaining others, but nothing could take the place of her grandchildren. She loved her grandchildren with all her heart. She found much strength and faith through her church home and pastor, Rev. Anthony McKinney at Ebenezer Baptist Church. She loved singing in the church choir and was often asked to utilize her singing ability at weddings and funerals. Deborah was the definition of a devoted mother, grandmother, sister, aunt, cousin, and friend. She is truly going be missed by all the hearts she has touched and the joy she brought to everyone she encountered. On Thursday evening, July 29, 2021, while under the care of Baptist South Hospital in Montgomery, Alabama, Deborah realized the battle was not hers, it was the Lord's; knowing that she had fought a good fight, she had finished her course, and she had kept her faith and now it was time for her to serenely gained her heavenly wings and accept her crown of righteousness the Lord has prepared for her as she transitioned to her eternal home hearing the call of her Master saying, "Well Done My Good and Faithful Servant". Greeting her with outstretched welcoming arms were her husband, Frankie Wells, Sr., and parents, Robert C. Miller and Artie Michelle Scott, grandson, Markeil Wells, and aunt, Catherine Richardson. Deborah leaves behind a legacy of love and memories to forever be cherished by her son, Frankie Wells, Jr., three daughters, Tabatha Wells, Whitney Wells, and Britney (Cortez) Wells; five grandchildren, Mahoguni Evans, Makayla McKenzie, Ju'Siya Hall, Mortavius Hawkins, and Cortlee Lawson; fifteen brothers, Tora (Paula Bush) Scott, Ronnie Scott, Arthur Scott, William D. Scott, Calvester Lane, Paul Terrell, Brian Miller, Albert Curry, Steve Curry, Lawrence Williams, Ronald Williams, Lord Wilson, Robert Taylor, John McClurkin, and Luke Swain; twenty-four sisters, Nadine Scott, Kathlyn Scott, Gail Scott, Brenda Sullivan, Cheri Scott, LaTonya (Charlie) Lawson, Janet Miller, Felecia Miller, Mary Curry, Judy Williams, Koren Parker, HiHa F. Bryant, Stephanie Player, Margaret Taylor, Lisa Dickerson Cass, Wanda Faye Dickerson, Pat Dickerson, Angela Dickerson, Iris Bedford, Lataya Gambles, Lisa Wilson, Helen Turner, Henrietta Meadows, and Dorothy Johnson; God son, Damien Fluker; two special friends, Sharon Williams and Rick Norwood; and a host of aunts, uncles, cousins, other relatives, and friends.

Mrs. Deborah Scott Wells was born to the late Robert C. Miller and Artie Michelle Scott on March 26, 1963, in Talladega, Alabama. Deborah was a true servant of the Lord, and it was proven throughout her earthly journey. At an early age, Deborah... View Obituary & Service Information

The family of Mrs. Deborah Wells created this Life Tributes page to make it easy to share your memories.

Send flowers to the Wells family.