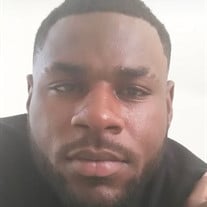 Mr. Darionta KeShawn McKinney began his earthly journey on September 30, 1997, in Anniston, Alabama to the parentage of Chakerra Emory and Ace Griffin. Darionta was educated in the Jacksonville City School System until 9th grade when he relocated to Smiths Station, Alabama becoming a 2016 graduate of Smiths Station High School. Upon completion of high school, Darionta decided to serve his country by joining the US Marines. He later returned to Stone Mountain, Georgia working various jobs as an entertainer before moving to Santa Ana, California where he had begun to live his dreams in hopes of becoming a model. He touched so many lives with his bright infectious smile and charming personality. Darionta, affectionately known by many as "Dee" or "Trey", was well known for the love he had for his family. Self- assured and very aware, Darionta would spend countless hours with his siblings guiding them and encouraging them to be the very best that they can be. On Friday, February 11, 2022, at the young age of 24, while residing in Santa Ana, California, Darionta departed this earthly life to enter into his new eternal existence. Darionta was preceded in death by his maternal grandmother, Cheryl L. Emory and brother Baby Dylen K. McKinney. He leaves to cherish his memory, his loving mother Chakerra Emory of Stone Mountain, Ga and father, Ace (Natosha) Griffin of Fort Mitchell, Al; maternal grandfather, Ben (Beverly) McKinney of Anniston, AL; paternal grandmother, Gwendolyn Griffin of Anniston, AL; paternal grandfather, Kenneth Griffin of Lake City, FL; brothers, Octavius A.B. Emory of Anniston, AL, Airman First Class Duntarius K. Griffin stationed in Japan, Alijah G. Stone, Caleb A. Griffin and Emaree C. Griffin all of Fort Mitchell, Al; Nathaniel N. Smith and Traveno J. Montgomery of Stone Mountain, GA; sister, Cheryl L. McKinney, the FAVORITE, of Stone Mountain, GA; niece, Ta'Maiah Nicole Hines of Anniston, AL; and a host of aunts, uncles, cousins, other relatives and friends. Darionta will truly be missed by all the lives he has encountered, but his infectious smile, heart of gold, and enthusiasm will live on in the hearts he has touched.

Mr. Darionta KeShawn McKinney began his earthly journey on September 30, 1997, in Anniston, Alabama to the parentage of Chakerra Emory and Ace Griffin. Darionta was educated in the Jacksonville City School System until 9th grade when he... View Obituary & Service Information

The family of Darionta KeShawn McKinney created this Life Tributes page to make it easy to share your memories.

Send flowers to the McKinney family.