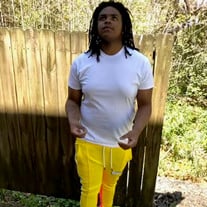 D'Marian Jherico Miller began his earthly journey on August 23, 2003, to the parentage of the Tareka Dickerson and Darryl Miller in Talladega, Alabama At an early age, D'Marian accepted Christ as his Lord and Savior and united with Wesley Chapel AME Church where he was a member of the Master Angels Praise Team and under the leadership of Mr. Clint Johnson and Ms. Sheila Chappel, D'Marian was a participant in The Goliath Project. D'Marian attended Talladega High School and prior to his untimely demise, he was looking forward to completing his 12th grade year of schooling and becoming a member of the Talladega High School Class of 2022 Fighting Tigers. D'Marian loved sports and it was proven on the court with his Fighting Tigers Basketball Team. He was striving to become the best he could be and by furthering his education in welding and having a bright career ahead as a welder. He always wanted to work and being employed with Burger King just wasn't good enough and he said he knew he had to finish school and get his welding career underway. Although fate would prove to be a factor in D'marian's life, only God would hold his future in the palm of his hand. D'Marian, affectionately known as "DJ" - (Dee Shiesty) was well known for the love he had for his family, his kind manners and respect for others, and his energetic and humble spirit. He was an avid Alabama Fan and loved playing on his play station with his friends. Unexpectedly D'Marian received a call Sunday, August 1, 2021, but little did he know, his Master had scheduled that call for his eternal meeting with him joining his grandmother, Billye Jo Morris, and leaving behind the troubles of this mean, sinful, and evil world. Leaving behind to cherish all his love and precious memories are his loving mother Tareka (Calvin) Dickerson; father, Darryl Miller; brothers, D'Andre Miller and D'Angelo Miller; sister, Kandace Miller; grandparents, Charlotte Dickerson, Alvin Dark, and Burt Miller; great-grandmother, Fannie B. Dickerson; three aunts, LaKeeshia Dickerson, Tammala Dickerson, and Sencila Miller; six uncles, Alvin Suttle, David Jemison, Larry Miller, Kendrick Miles, Terrance Dickerson, and Michael Dickerson; eight great-aunts, Valerie (Michael) Cosby, Tracy Montgomery, Bobbie Morris, Aileen Bradford, Abigail Miller, Kathy (Michael) Elston Aldrecia (Dana) Andrews, and Hattie Brown; eight great-uncles, James (Bianaica) Beck, Terry Dickerson, Cedric Montgomery, Ralph Morris, Charles Miller, Franklin Miller, Willie James Miller, and Cecil Miller; four special aunts, Ja'Cinta Turner Cole, Gladys Brown Estell, Sha'Nika Morgan, and Kimberly Fears; three special cousins, MoDasia Edison, Ja'Nyah Wallace, and Dontavious Dickerson; and a host of cousins, other relatives and friends. D'Marian will truly be missed by all his family, friends, and the lives he has touched.

D'Marian Jherico Miller began his earthly journey on August 23, 2003, to the parentage of the Tareka Dickerson and Darryl Miller in Talladega, Alabama At an early age, D'Marian accepted Christ as his Lord and Savior and united with Wesley... View Obituary & Service Information

The family of D'Marian J Miller created this Life Tributes page to make it easy to share your memories.

Send flowers to the Miller family.