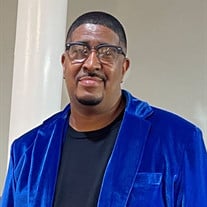 THE FLAME Life's candle for Corey Darrell Murphy began on October 26, 1971, in Anniston, Alabama. His smile was as bright as the sun. His light was guided by his parent's; the late Florene Groce-Harris and Sylvester Harris, Sr. His grandparents, the late Lorene Ware-Groce and the late Roosevelt Groce were also instrumental in his guidance. Corey shared his flame with three siblings, Derrick, Sharee, and Sylvester, Jr. As his flame grew, Corey was baptized and joined his family church, Smith Tabernacle C.M.E. where he attended most of his life. He received his formal education in the Calhoun County School system and was a member of the graduating Class of 1990 from Anniston High School. Corey met and married his "twin flame" Erica Cunningham, and to their union of thirty-four years, they were blessed with one beautiful daughter, Keosha S. Murphy. Corey was skilled and a dedicated employee at Anniston Army Depot for seventeen years. He served as a H.M.E Process Improvement Specialist, and an Active Leadman. He received his Embalmers certification from Jefferson State College in Birmingham, Alabama and co-operated the family business as a licensed Embalmer and Funeral Director, at the former Model City Mortuary. GAME DAY Corey's love for sports was second to none. He remained an avid fan of his high school alma mater the "Anniston Bulldogs" and rarely missed a game. Equal to his passion for the bulldogs was his love for the "Auburn Tigers." If you had a chance to visit with him at his home (man cave) you knew without question, what team he pledged his allegiance to. His love for sports did not stop at watching the game but extended to coaching Little League teams as well. It would not be easy to find a man as humble, with such an infectious smile as Corey. His unwavering love for his family and friends was unquestionable! Perhaps... you caught a glimpse of his flame as he drove pass in his 'BIG RED TRUCK'. To know him was to love him and his memory will shine forever. MEMORIES I cannot believe how clueless you were of the plans for your 50th birthday party. The look of ultimate surprise on your face and "THAT SMILE" that I fell in love with thirty-four years ago, I will always remember... YOU, the love of my life, my friend and my "TWIN FLAME"! Your loving wife, Erica. Dad, I know you wanted a boy for your first grandchild. We all saw the disappointment in your eyes at the gender reveal, but when we saw the look in your eyes and "THAT SMILE" as you held her, we knew then that you had grown another heartstring and FLAME, named HOPE. Your loving daughter, Keosha Corey, I will never forget when we were young, you got so upset with me you wanted to hit me with a stick because you thought I was going to leave you in the house all alone. Yet, you left me first. I will love you always, Derrick. I remember.... you always wanted to drive my car. What stands out the most is the time when you and your friend put transmission fluid in the oil tank and tore up my car. When you brought it back you got out and left without even mentioning it. I would do anything for you to drive my car again. You recently asked me if I was going with you? NO, but I will let you drive my car again. I love you forever and always, Sharee. I will never forget grandma told us time after time to stop playing with the fish that dad has just caught... I stopped! But you did not! The fish jumped out of the bucket with the hook still in his mouth and caught you... right in the leg. Well, that was the end of your fishing days. I love you brother and I'll never forget you, Fat. Corey, I remember at your birthday party, you talked about the ugly dress I had on, and kindly asked me not to ever wear it again. Well....guess what, I probably never will. But when I look at it, you will always come to mind, and I will know that you are still laughing at me... Love you always...your honorary sis, Erica God Daddy... I love you and I will never forget you. I will always remember you calling me pickle nose. Meikhi Murray THE FLAME DIMS On Wednesday, March 16, 2022, surrounded by his loving family... Corey Darrell Murphy transitioned from this life into eternal life. Corey was preceded in death by his mother; Florene Groce-Harris and grandparents; Lorene Ware-Groce and Roosevelt Groce. He was a loving and supportive husband, father, grandfather, son, and brother. His loving memory will be missed and cherished by all who knew him. Corey is survived by his loving wife; Erica Cunningham-Murphy, one daughter; Keosha S. Murphy, granddaughter; Hope Webster, father; Sylvester Harris, Sr., one sister; Sharee Murphy, two brothers; Derrick Murphy and Sylvester Harris, Jr., five aunts; Rozetta Groce-Thompson, Margaret Holman, Delores Street, Linda Groce, and Costella Ware, one sister-in-law; Sonya Cunningham, three brothers-in-law; Kevin Cunningham, Reginald Cunningham, and Christopher Cunningham, one God-son; Meikhi Murray, Honorary Son; Akeem Webster, and a host of nieces, nephews, cousins, and friends. Corey was preceded in death by his mother; Florene Groce-Harris, grandparents; Lorene Ware-Groce and Roosevelt Groce. Funeral arrangements are entrusted to S.M. Goodson Funeral Home in Talladega, AL.

THE FLAME Life's candle for Corey Darrell Murphy began on October 26, 1971, in Anniston, Alabama. His smile was as bright as the sun. His light was guided by his parent's; the late Florene Groce-Harris and Sylvester Harris, Sr. His grandparents,... View Obituary & Service Information

The family of Corey Murphy created this Life Tributes page to make it easy to share your memories.

Send flowers to the Murphy family.