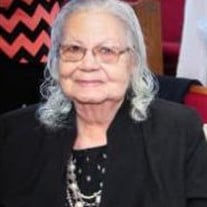 Christine Dobbins English was born on June 15, 1926, in Havana, Alabama. She was the fourth of five children born to the union of the late Robert Haywood and Naomi A. Dobbins. Ms. English resided in Havana, Alabama, until she graduated the 6th grade and then moved to Birmingham, Alabama, to live with her oldest sister, Juanita Dobbins. Christine graduated from A. H. Parker High School in 1944. She attended and graduated from Miles College with a degree in elementary education in 1948. She was Miss Miles College during her time in school. She also attended and studied at Birmingham Southern and Montevallo College. Ms. English was a beloved and influential leader in the Talladega public school system. She was for 38 years until she retired in 1991. She accepted and confessed Christ at an early age. She was a member of Star of Bethlehem CME Church in Havana, Alabama. After moving to Munford, Alabama, she later joined and was a member for 50-plus years of Shady Grove Baptist Church, where she served faithfully throughout her life. She was honored in October 2019 at the 150th Church Celebration as the Oldest Member of the Church. She earned numerous awards and recognitions throughput her tenure of teaching. While at The Shady Grove Missionary Baptist Church, she served in many capacities. She was a member of the Junior Missionary/Red Circle and the Calendar Committee. Mrs. English was an overall dedicated Shady Grove Member. Additionally, Mrs. English was a dedicated honorary member of the Rushing Springs District Association. When she moved to Talladega County, she united in holy matrimony to Bob English on June 27, 1950, and their union lasted for 45 years until his death in 1995. This union was blessed with three children. One preceded her in death, Bob Lee English. She was also preceded in death by three sisters, Juanita M. Dobbins, Quintella Dobbins Horne, and Ellarettus Dobbins Kemp, and one brother, Robert L. Dobbins. Mrs. English was very active in the community, as she had a heart for service. Her hobbies included being an active member of Order of the Eastern Star #545, as well as a volunteer at Fervent Servant for Citizens Baptist Medical Center and at Talladega Hospital. She was also a poll judge throughout her life, serving her community through her voting years. She was a talented seamstress and member of the Homemakers Club. After her retirement, she enjoyed traveling on cruises and watching her favorite game shows. She answered the Lord's call and went home to her Heavenly Father on Sunday, December 5, 2021, where she was surrounded by her family. Mrs. English, affectionately known as "Tine" to her immediate family, leaves to cherish her memory: two sons and daughters-in-law, Zanus and Juanita English and Gary and Mary Patricia English of Peoria, Illinois; four grandchildren, Tavious D. English, Kevin B. English (Ashley), Shamera N. English, and Alicia M. English; three great-grandchildren, Calvin B. English, Ayana Christine English, and Trenton John (TJ) English; six nieces, Jacquelyn Kemp, Curlie Jean McDaniel, Gail Horne Ray, Nancy Henderson, Alma McKnight, and Ruth Ellen Henson; six nephews, Alfano Kemp, Arthur Horne, Ed Hawkins, Henry Hawkins, Jerry Hawkins, and Steve Hawkins; several great- and great-great-nieces and nephews; loving special daughter, Lillian Wilson; caregivers, Doris Tanner, Vera Curry and Brenda Story; and a host of other relatives and friends who will forever miss her.

Christine Dobbins English was born on June 15, 1926, in Havana, Alabama. She was the fourth of five children born to the union of the late Robert Haywood and Naomi A. Dobbins. Ms. English resided in Havana, Alabama, until she graduated the 6th... View Obituary & Service Information

The family of Christine English created this Life Tributes page to make it easy to share your memories.

Send flowers to the English family.