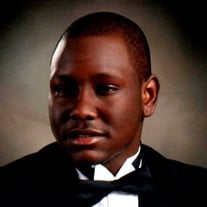 Christian McKenely Nobles affectionately known by all as "Chris" was the cherished and beloved son of Bernard and Debora Nobles. Christian started his earthly journey on September 6, 1991, in Birmingham, Alabama. Christian accepted Christ as his Lord and Savior at an early age while attending Mt. Zion Baptist Church in Anniston, Alabama under the leadership of his step-grandfather Rev. Cleveland Jones. After the passing of Rev. Cleveland Jones, Christian kept his faith and continued serving the Lord uniting with Parker Memorial Baptist Church. As a member of Parker Memorial Baptist Church in Richeytown, Alabama, Christian enjoyed dressing up and attending church in his "Sunday's Best". Christian was a 2010 graduate of Faith Christian School where he was a member of the baseball and basketball team. After completing high school, Christian attended Atlanta Christian College on a baseball scholarship and later attended Talladega College where he became a walk on to the baseball team. He completed his undergraduate studies at Jacksonville State University and graduated with a bachelor's degree in 2015. Christian was currently enrolled at the University of West Alabama and was rearing completion of his Master's in Business Administration. Christian enjoyed attending both college and professional baseball games with his dad. He loved to travel, and he was a super fan of University of Alabama football team. Christian was also a "foodie" who appreciated exploring new restaurants. Christian was employed with Northeast Alabama Regional Medical Center as a reprocessing technician in the surgery department. His day started every morning at 5 a.m. making sure all the doctor's equipment was prepared and the computer reflected what surgeries were to take place each day. Christian was well-loved by his colleagues, and they often spoke of Christian's pleasant demeanor as he had an infectious smile that would brighten the whole room. Christian was well known and loved not only by his colleagues, but by his family and friends as well. He had an unfathomable love for his family and the connection was shared among those that were dear to him. Simply because of who he was, he was extremely easy to love. To know Christian was to love Christian. On the evening of November 8, 2021, Christian's earthly life journey ended when he accepted his heavenly wings and transitioned to his eternal resting place joining hands with his maternal grandparents, Edgar B. and Estelle Coleman, his paternal grandfather, McKenely Nobles and two aunts, Aunt Brenda Malone and Aunt Janice Turner. Leaving behind to cherish all his love and precious memories are his loving parents, Bernard and Debora Nobles; grandmother, Norma Jones; and a host of aunts, uncles, cousins, other relatives and friends. Christian will truly be missed by his friends, loved ones, and by all the hearts he has touched.

The family of Christian McKenely Nobles created this Life Tributes page to make it easy to share your memories.

Send flowers to the Nobles family.