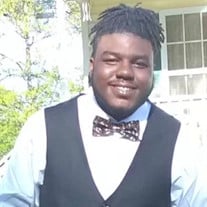 Remembering the Life of Mr. Cecil Paul Adair, Jr., 21, of Talladega, Alabama, will be held Thursday, December 29, 2020, at 1:30 p.m. at S. M. Goodson Funeral Home Chapel Alabama with Pastor Clarence Henderson Officiating. Interment will follow in Kelly Springs Memorial Gardens. Kenneth Stamps will be delivering the Words of Comfort. There will be a public viewing for Mr. Adair on Wednesday, December 30, 2020 from 1-6 p.m. at S.M. Goodson Funeral Home. Professional services entrusted to S.M. Goodson Funeral Home-Talladega. Cecil Paul Adair, Jr. began his earthly journey on June 26, 1999 to the union of the Kaneashia Stamps and Cecil Paul Adair, Sr. in Clay County, Alabama. During Cecil’s adolescent years, he attended various churches, but at the age of 16, he made First Baptist Church of Oxford, Alabama his home of worship. He received his education from Clay County Central High School and was a 2018 graduate of Oxford High School where he excelled in sports including track, basketball and football. Cecil worked various jobs after completing high school and later moved to Battle Creek, Michigan for better job opportunities. Because of the love for his family and missing home, Cecil returned to Talladega. Although fate would prove to be a factor in Cecil’s life, only God would hold his future in the palm of his hand. Cecil, affectionately known by many as “Cee or Ce-NO”, was well known for the love he had for his family, his kind manners, and his energetic spirit. He would spend countless with family entertaining, dancing, playing cards, and being the life of the party... Unexpectedly Cecil received a call on December 19, 2020 at approximately 4:15 p.m. asking for a meeting. Little did he know, his Master had scheduled that call for his eternal meeting with him so he could leave the troubles of this sinful, evil world behind and join his heavenly family that was awaiting him. This would be his grandparents, Henrietta Stamps Cole, Willie Pearl and Lynbirg Adair. Leaving behind to cherish all his love and precious memories are; a loving devoted mother, Kaneashia (Larry) Stamps-Pointer; father, Cecil (Angela) Adair, Sr.; three brothers, Unterrius (Kendra) Stamps, LaDerrick Stamps, and Octavius Adair; three-step brothers, Larry Pointer, Jr., Aaron Pointer, and Patrick Heard; two step-sisters, Kizzie (Sam) Lane and Talynda Pointer; grandfather, Will (Cint) Thomas; two nieces and two nephews; two uncles, Octavius Stamps and Jeffrey Stamps; two aunts, Markeise (Bernard) Twymon and Teresa (Miller) Pearson; three great-aunts, Flora (Tom) Hunley, Beverly (Steve) Morrison, Brenda (Shyene) Curry; one great-uncle, Maurice (Kathy) Stamps; special cousin/aunt, Tracy (Jeffrey) McCluney; and a host of nieces, nephews, cousins, other relative and friends. Cecil will truly be missed by all the lives he has touched.

The family of Mr. Cecil Paul Adair, Jr. created this Life Tributes page to make it easy to share your memories.

Send flowers to the Adair family.