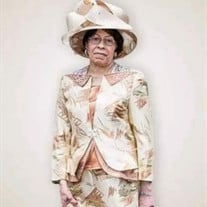 The Intimate Moments of the Life of Catherine Cunningham Catherine A. Cunningham, 81, of Talladega, Alabama was born on April 25, 1939 to the late Lucious Allen and the late Effie D. Hunt in Delta, Alabama. She began her life early as a Faithful Follower of Christ! Being led by the Spirit of Jesus, she began to make sacrifices for many, in which the first one was assisting her working Mother with the raising of her siblings. Her motherly care continued throughout her entire life, constantly giving to others including her three children (Andrew (Shirley), Darryl (Marie) and Renea (Ray) along with her grandchildren, relatives and friends. Her passions included music and singing, which included the well-known Gospel group which was formed by her family known as the "Original Five Gospel Pearls", (Catherine, Myra, Shirley, Nellerine, and Bobby) which afforded them the ability to travel abroad singing the Gospel of Jesus Christ. Their Mother Effie D. Hunt served as their manager and booking agent. Her musical passions led her to become a self-taught Guitarist and Pianist. Most singing groups did not have instruments; however, she became focused and determined to provide this special musical attribute the group. This attribute with the talented voices of her sisters and brothers allowed them to bless others with beautiful Gospel Music. Her passion as a clothing designer and seamstress led her to becoming known for her ability to design and produce beautiful clothes for others which includes the Five Gospel Pearls. Her most prized possession was a Cummerbund which fit snuggly around her 24-inch waist! She broke many racial barriers as a seamstress for Palm Beach Clothing Factory in Talladega, Al. She continued her Spiritual journey later in life as an active member of Rocky Mount Baptist Church where she served in many capacities. Her fondest memories included her serving as Choir Director over the Youth Choir along with her cousin, Mrs. Mary Emma Smith and Mrs. Rose Lewis where she taught them four-part harmony. She displayed the capacity to love any child that she came in contact with. Being a lover of Mathematics, she often tutored her children in their classes from elementary to college. Her talents and passion are too numerous to mention however her greatest gift was her gifts that she gave from heart whether she was singing, playing instruments, sewing, cooking, educating and loving others! Her most beautiful relationship, that comes second only to love of Jesus Christ, is her relationship that she shared with the love of her life, her best friend and her husband James. Their relationship continued over 61 years and her greatest joy came when they renewed their vows on a cruise deemed as the Fairytale Wedding of their life! Late in the evening of Thursday, March 4, 2021, Catherine gained her wings and calmly transitioned from her 81-year earthly life journey to her new eternal home when she answered the call of her Master while in the care of Brookwood Citizen's Baptist Medical Center in Talladega, Alabama. She was welcomed home by her parents, Lucious Allen and Effie D. Hunt; sister, Myra James; and grandson, Andrew L. Cunningham, Jr. Catherine's loving memories will forever be cherished and remembered by her devoted husband of 61 years, Mr. James Cunningham; daughter, Renea (Jerome) Benson of Birmingham, AL; two sons, Andrew L. (Shirley) Cunningham and Darryl (Marie) Cunningham, Sr., both of Birmingham, AL; three brothers, Rev. Bobby Allen of Pensacola, FL, Paul (Lucille) Hunt and John Hunt of Panama City, FL; three sisters, Shirley (Tom) Keys and Nellerine Jones of Panama City, FL, Claudia Gilliam of Lake Charles, LA, and Gloria Keith of Dothan, AL; one stepbrother, Billy (Ada) Hardy of Lineville, AL; one granddaughter, Grace A. Cunningham; five grandsons, Darryl L. Cunningham, II, DeMario L. Cunningham, Derek L. Cunningham, Antonio J. Benson, and Jailon R. Benson; and a host of nieces, nephews, other relatives, and friends. Farewell our Beautiful Queen!

The Intimate Moments of the Life of Catherine Cunningham Catherine A. Cunningham, 81, of Talladega, Alabama was born on April 25, 1939 to the late Lucious Allen and the late Effie D. Hunt in Delta, Alabama. She began her life early as... View Obituary & Service Information

The family of Mrs. Catherine A Cunningham created this Life Tributes page to make it easy to share your memories.

The Intimate Moments of the Life of Catherine Cunningham

Send flowers to the Cunningham family.