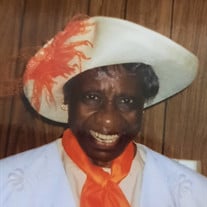 Carrie Franks Swain Stockdale was born on May 26, 1926, in Fayette County, Alabama, to the late Nettie Hodges Franks and Grover Cleveland Franks. Carrie and her family were sharecroppers, and ah had to work the fields and go home and cook for the whole family. She decided that there was a better life for her elsewhere, so when her mother told her to go home and cook, she said okay and walked right past her home leaving behind her parents and nine siblings. Carrie walked to Childersburg, Alabama where she met and later married Henry Swain. From this union, seven children were born. After losing Henry in death, she married Levi Stockdale. Carrie remained married to Levi until his death. Carrie was employed with Alabama institute for the Blind and Talladega College Cafeteria. Carrie confessed Christ at an early age. She attended Greater Ebenezer Baptist Church and later moved her membership to Mt. Cleveland Baptist Church. Carrie was an active member in many of the church ministries including the Missionary Ministry (where she served as president), the deaconess, the Trustees, and several other ministries. A few of her hobbies that she was taught at an early age included quilting, crocheting, and sewing. Each grandchild was always gifted with a special handmade quilt. Carrie’s most favorite hobby was cooking. Her food was not only known for feeding the body, but it was also known for feeding the soul. Carrie had one of the most beautiful gardens in the Knoxville Community, which was filled with her favorite produce. Just like everything else, her gardening was done with love. Most of all, Carrie was a faithful church member, devoted mother, grandmother, and friend to many. On the morning of January 30, 2021, after God had graciously given Carrie to us for ninety-four long earthly years, he felt it was time for him to peacefully close her eyes one last time to this earthly world, accept her new wings and fly to her new eternal home on high. At her new home, she was greeted by all her loved ones that had preceded her in death. She leaves to cherish her loving memories; her four loving daughters, Barbara Miller, Tanzie (William) Rankin, Basimah Shakir, and Shirley (Robert) Jordan; three beloved sons, Larry (Jo Anne) Swain, Earl Swain, and Tyrone Swain; twenty-six grandchildren; 39 great-grandchildren; twelve great-great grandchildren; a host of nieces, nephews, and dedicated friends of the Knoxville Community.

Carrie Franks Swain Stockdale was born on May 26, 1926, in Fayette County, Alabama, to the late Nettie Hodges Franks and Grover Cleveland Franks. Carrie and her family were sharecroppers, and ah had to work the fields and go home and cook for... View Obituary & Service Information

The family of Carrie Stockdale created this Life Tributes page to make it easy to share your memories.

Send flowers to the Stockdale family.