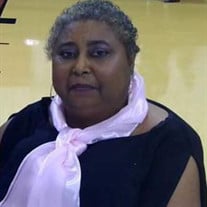 On April 22, 1953 in Camp Hill, Alabama, the late Mr. Lamar Swain and the late Mrs. Louise Brown Swain welcomed to their union one of seven children, a beautiful sparkling baby girl named Carolyn. She was loved by many people, especially her four beautiful and loving daughters whom she took great care and gave all the motherly love a mother could give. Carolyn had a passion for dancing and could cut the rug at the sound of any music. She was very private and family oriented and she enjoyed cooking for her family, friends, and loved ones. You could often find Carolyn shopping with her sister and during football season, you there is no doubt that she is somewhere cheering on the Alabama Crimson Tide Football Team. She was cherished immensely by her family and all who knew her. At an early age, Carolyn accepted Christ as her Lord and Savior and united with Greater Ebenezer Baptist Church where she remained a faithful member until her health begin to fail. She received her formal education at Westside School in the Talladega City School System. Carolyn worked for several years after completing school, but she later decided to spend every minute possible raising her four girls and making sure they received all the motherly love she could provide to them. On Monday, November 15, 2021, Ms. Carolyn Jean "CJ" Miller, a beloved mother, grandmother, great-grandmother, sister, and aunt transitioned peacefully from this earthly walk of life to her new eternal resting place when she answered the call of her Master saying, "Well Done My Good and Faithful Servant" while under the care of Grandview Medical Center in Birmingham, Alabama. Greeting her with outstretched arms at those pearly gates of heaven were her parents, Lamar and Louise Swain, grandparents, Charlie and Mary Brown, Goddaughter, Jennifer Smoot, brother, Edward Swain, sisters, Glenda Miller and Farris Spencer, nephew, William Lawler and great-nephew, Javaon Ousley. Carolyn's legacy of love and memories will forever be cherished and remembered by; her four daughters, LaTonya (Robert) Wilson, Patricia Miller Garrett, Ranae (Broderick) Walker and Mary (Brandy) Swain; one brother, Mitchell (Ellen) Swain; two sisters, Sallie Mae Lawler and Virginia Ousley; grandchildren, Frederica S. (Haleem) Santiago, Myc'Kedia B. Miller, La'Tisha N. Wilson, RyCynthia F. Wallace, Meiata B. Miller, Maiya J. Miller, Tavarious T. Wilson, JLyricc M. Miller, Brianna L. Smoot and Favian V. Finley, and Miracle Tanner; great-grandchildren, Haleem Santiago, Jr., Jamari Nesby, Bryant Hamilton, Meelah Santiago, Ja'Mir Gater, Karson Wallace, D'Corian Tanner; a special son-in-law, James Garrett and a host of aunts, uncles, nieces, nephews, other relatives and friends.

On April 22, 1953 in Camp Hill, Alabama, the late Mr. Lamar Swain and the late Mrs. Louise Brown Swain welcomed to their union one of seven children, a beautiful sparkling baby girl named Carolyn. She was loved by many people, especially her... View Obituary & Service Information

The family of Carolyn Miller created this Life Tributes page to make it easy to share your memories.

Send flowers to the Miller family.