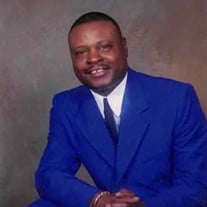 Carey Damon Culver was born to the late Lester Culver, Sr. and Betty Bell Culver on October 11, 1958 in Anniston, Alabama. Carey attended school in the Calhoun County School system and was a graduate of Anniston High School Class of 1977.... View Obituary & Service Information

The family of Carey Culver created this Life Tributes page to make it easy to share your memories.

Carey Damon Culver was born to the late Lester Culver, Sr. and...

Send flowers to the Culver family.