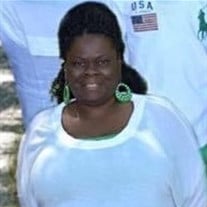 Ms. Beulah Denise Suttle was born on December 31, 1959, to the union of the late Early Curry and the late Dorothy Suttle in Talladega, Alabama. Beulah was a member of Faith Whole Truth Holiness Church in Talladega, Alabama. She enjoyed the singing and sermons that were spoken. Beulah attended school in the Talladega City School System and was a graduate of Talladega High School. Upon her completion of school, Beulah worked various private healthcare jobs as a certified nursing assistant until her health began to fail and she retired. Beulah affectionately known as "Fat-Back" was a fun-loving person who loved her children and her beautiful grandchildren, who were the apples of her eyes and the joys of her life. She enjoyed going to the casino with family and friends and was looking forward to playing those slots while celebrating her "62nd" Birthday on December 31, 2021, but God had better plans for her in his vineyard. Beulah was a mother, grandmother, sister, aunt, and friend who will be missed immensely by all the hearts she has touched while traveling on the journey of life. On Sunday, December 12, 2021, while under the care of East Alabama Medical Center in Opelika, Alabama, Beulah peacefully departed this walk of life as she transitioned to her heavenly home joining hands her parents, Early Curry and Dorothy Suttle. Beulah leaves to cherish and remember her loving memories: her daughter, Moneshia (Jason Woods) Suttle; one son, Alvin (Takea) Suttle; two brothers, Larry Suttle and William (Scooby) Turner; one sister, Tammy Suttle; five loving grandchildren, Aasiyah Suttle, Gavin Suttle, Alvin Suttle, Jr., Taniah Taul and Qurienton Scales; special granddaughter, Haven Suttle; one special niece, Precious Suttle; special friend, Juanita Morris; and a host of nieces, nephews, other relatives and friends.

The family of Beulah Denise Suttle created this Life Tributes page to make it easy to share your memories.

Send flowers to the Suttle family.