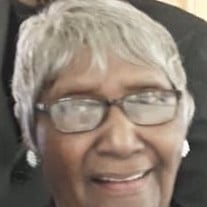 Bennie Lee Wilson Garrett, 88, of Talladega, Alabama was one of nine children born to the union of late Benny and Annie Bell Cook Wilson on February 14, 1933 in Talladega, Alabama. Being led by the Spirit of God at an early age, Mrs. Garrett confessed Christ and united with Africa Missionary Baptist Church where she was a member of the choir and matrons for many years. She received her formal education from in the Talladega County School System. After completing her education, Mrs. Garrett began her working career in the textile industry at Avondale Mills in Sycamore, Alabama until the mill closed. Her textile career continued when she began working at the Avondale Mills Eva Jane Plant in Sylacauga, Alabama until her retirement. Mrs. Garrett was a hard worker and dedicated employee, which became a known fact when even in retirement, she decided to continue working in the deli department of Winn Dixie grocery chains. After many devoted years of deli work, Mrs. Garrett became employed as a dietitian with Beverly Healthcare in Oxford, Alabama. Along Mrs. Garrett's most beautiful and blessed 88 earthly years, she met the love of her life, Mr. Paul Eddie Garrett, Sr. who later became her husband when they were united in Holy Matrimony. They were blessed with four loving children. Mrs. Garrett loved her family and was graciously blessed to see five generations of love. On the morning of Sunday, October 10, 2021, Mrs. Bennie Lee Garrett was called to take her eternal rest from eighty-eight blessed earthly years of a job well done. She was preceded in death and welcomed home by her parents, Bennie and Annie Wilson, son, Eddie Frank Garrett, five brothers, Lovell Wilson, Vester Lee Wilson, David Wilson, William Wilson, and James Woodrow Wilson, two sisters, Ester B. Wilson Higgins and Annie B. Wilson McGhee. Mrs. Bennie Lee Garrett's eighty-eight-year legacy of loving memories will forever be cherished and remembered by her two sons, Eddie Lewis (Gloria) Wilson and Paul (Sandra) Garrett, Jr.; one daughter, Bobbie Jen Wilson Cook; sister, Pauline Wilson McGhee; a granddaughter (Yashica) that she held very dear to her heart; a nephew(Will Higgins) that she called her own; ten grandchildren; eighteen great-grandchildren; three great-great grandchildren; special caregiver, Nesha Truitt; and a host of nieces, nephews, other relatives and friends.

Bennie Lee Wilson Garrett, 88, of Talladega, Alabama was one of nine children born to the union of late Benny and Annie Bell Cook Wilson on February 14, 1933 in Talladega, Alabama. Being led by the Spirit of God at an early age, Mrs. Garrett... View Obituary & Service Information

The family of Bennie Lee Garrett created this Life Tributes page to make it easy to share your memories.

Bennie Lee Wilson Garrett, 88, of Talladega, Alabama was one...