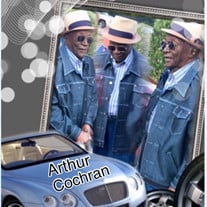 Homegoing Celebration Remembering the Life of Mr. Arthur N. Cochran, 99, will be held on Saturday, December 19, 2020 at 12 p.m. at Oak Hill Cemetery with Bro. David Johnson officiating. There will be a public viewing for Mr. Cochran on Friday, December 18, 2020, from 1-6 p.m. at S.M. Goodson Funeral Home. Professional services entrusted to S.M. Goodson Funeral Home-Talladega. Mr. Arthur Cochran, Sr. was one of eight children born to the union of Nathaniel Cochran and Nealie Ann McCargo Cochran in Talladega, Alabama on November 16, 1921. Mr. Cochran 99-year life’s journey has truly been a blessing to everyone he has encounter beginning with his youth. As a youth, Mr. Cochran united with Tinney Street Church of Christ. He attended Talladega County Central High School, formerly known as Talladega County Training School. Upon completing school, Arthur’s next path was to fall in love and find his soulmate, Mrs. Sopharine Taylor Cochran. They were united in holy matrimony on November 9, 1941, and to this union birth was given to five beautiful children. Arthur then decided to consecrate several years of his life to his country by joining the U.S. Army in November of 1943. After nearly 3 years of dedication and serving in World War II, Arthur was honorably discharged. During his devoted service to his country, Arthur received a number of military decorations and citations including The World War II Victory Medal, Occupational Ribbon ETO American Theater Service Medal, EAME Service Medal with 1 Bronze Service Star, Good Conduct Medal and the Meritorious Unit Award Go 276 HQ TSFET. Once Arthur returned home to his family, he began his working career starting with employment at Newberry Foundry in Talladega, Alabama. He later went to work at Birmingham Foundry in Birmingham, Alabama, and before retirement, he was employed with Crown Textile in Talladega, Alabama. Later in life, Arthur extended his family and became the father of fourteen children and lived to see five generations including being the grandfather of thirty-six, great-great grandfather of fifty-two, and great-great-great grandfather of fourteen. Mr. Cochran was a fun loving, kind-hearted, energetic person who loved gardening and cooking. He was known as the Father of his community. Arthur had several nicknames including Daddy Arthur, Daddy Crock, and Big Crock. He loved cooking for his family and friends, playing the game of checkers, and nothing was going to interfere with him watching his favorite TV shows, LOVE AND HIP HOP” and “ATLANTA HOUSEWIVES”. On the morning of December 10, 2020, after God had graciously gave Arthur to us for ninety-nine long earthly years, he felt it was time for him to peacefully close his eyes one last time to this earthly world, accept his new wings and fly to his new eternal home on high. At his new home, he was greeted by his wife, Mrs. Sopharine Taylor Cochran; his parents, Mr. Nathaniel Cochran and Mrs. Nealie Ann McCargo Cochran; daughter, Annie Ruth Jones; son, Arthur Cochran, Jr.; sisters, Lucile Jones, Bessie Woods, Willie Parker, Izela Cochran, Maetta Fears, and brother, Alfred Cochran. Leaving behind to cherish the many years of Arthur’s loving memories are his four daughters, Bessie Curry of Detroit, Michigan, Sharon Duncan and Jacquelina Cochran of Talladega, Alabama, and Annie Froster of Munford, Alabama; eight sons, Willie Cochran and Melvin (Wilma) Cochran of Talladega, Alabama, Terry (Eleanor) Carmichael of Columbus, Ohio, Johnie of Munford, Alabama, Robert Street of Florida, Lewis McCargo, Jack Cochran, and Paul Chatman of Talladega, Alabama; one brother, Nathaniel Strait; thirty-six grandchildren, fifty-two great grandchildren, fourteen great-great-great grandchildren, and a host of nieces, nephews, cousins, other relatives and friends. Although a pillar of the community has gone before us, Mr. Arthur Cochran has left a legacy behind and he will truly be missed by all the lives he has touched.

Homegoing Celebration Remembering the Life of Mr. Arthur N. Cochran, 99, will be held on Saturday, December 19, 2020 at 12 p.m. at Oak Hill Cemetery with Bro. David Johnson officiating. There will be a public viewing for Mr. Cochran on Friday,... View Obituary & Service Information

The family of Arthur N Cochran created this Life Tributes page to make it easy to share your memories.

Send flowers to the Cochran family.