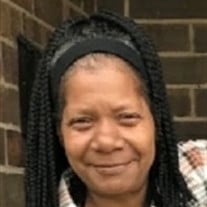 Ms. Arlisha Whitson was born on March 25, 1966, to the parentage of Mr. Johnny Whitson and Mrs. Delores Jackson McCargo in Talladega, Alabama. At an early age, Arlisha accepted Christ and united with City of Refuge. She received her formal education in the Talladega City School System and was employed by Talladega Healthcare for several years before she decided she wanted to spend more time with her family and especially her grandchildren. Arlisha loved taking care of not only her grandchildren, but all the kids in the neighborhood, which gave her the title "Neighborhood Mom". She loved watching Jerry Springer daily, but her favorite hobbies were partying and dancing. Arlisha did not bite her tongue when she spoke, she told it just like it was, even if it meant having to use a few profound words.. She will truly be missed by her family and all the lives she has touched. On Saturday, September 18, 2021, at the age of 55, Arlisha gained her heavenly wings and transitioned to her eternal home while under the care of Brookwood Citizen's Baptist Medical Center. Preceding her in death was her brothers, Darolye Whitson and James Whitson. Arlisha leaves to cherish her loving memories; her three daughters, Kendiada Whitson, Shaquita Whitson, and Shaquensha Whitson; one son, Kindercrius Whitson; her loving mother, Delores McCargo; father, Johnny (Mozell) Whitson; four sisters, Sonya Whitson, Deborah Whitson, Gloria Jackson, and Natassia McCargo; one brother, Danny Jackson; two step brothers, Robert (Joann) Jenkins and Sammy Jenkins; two step sisters, Sandra (Albert) Hall and Teresa (Joey) Phillips; a special friend, Robert Davis, Jr.; eleven grandchildren, Quintravious, Beyonce, Kindrea, Korey, Jr., Kindrevious, Raniyah, Nakiyah, Tariyah, Emerald, Cordasia, and Ayden; and a host of aunts, uncles, nieces, nephews, other relatives, and friends.

Ms. Arlisha Whitson was born on March 25, 1966, to the parentage of Mr. Johnny Whitson and Mrs. Delores Jackson McCargo in Talladega, Alabama. At an early age, Arlisha accepted Christ and united with City of Refuge. She received her formal... View Obituary & Service Information

The family of Ms. Arlisha Whitson created this Life Tributes page to make it easy to share your memories.

Send flowers to the Whitson family.