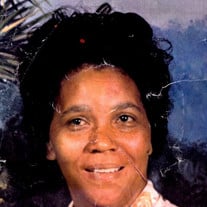 Mrs. Annie Smoot Scales, 87, of Talladega, Alabama was born on February 14, 1934, to the late Elizabeth Chapman Smoot and the late Benjamin Smoot in Talladega, Alabama. She began her life early as a faithful follower of Christ when she accepted Christ as her Lord and Savior and united with Africa Missionary Baptist Church. Later in life she continued working as a servant of the Lord and united with Peace Missionary Baptist Church. Mrs. Scales received her education in the Talladega City School system and was a graduate of Westside High School. For many years after Mrs. Scales was employed by Lees Laundry Dry Cleaner and later, she retired as a Resident Aide from Alabama Industries for the Deaf and Blind. Along Annie's life journey, she met, fell in love, and married her soulmate, Mr. Richard Lewis Scales, Sr. To this union was birthed four sons, Richard, Jr., Stephen, Kevin, and Genovesi. Mrs. Scales loved her sons with all her heart and enjoyed spending time her family, the kids from AIDB, playing bingo, and sitting on her front porch with neighbors and friends. On the afternoon of Friday, May 21, 2021, Mrs. Annie Scales gained her wings and calmly transitioned from her 87-year earthly life journey to her new eternal home when she answered the call of her Master while in the solace of her home. Welcoming her home with outstretched arms were her husband, Richard Lewis Scales, Sr., three sons, Richard Lewis Scales, Jr., Stephen Scales, and Kevin Scales, parents, Benjamin and Elizabeth Smoot, sister, Mabel Smoot, and two brothers, Nathan and Wilson Smoot. Annie's loving memories will forever be cherished and remembered by her devoted son, Genovesi (Markieva) Scales; three daughters-in-law, Joyce Hackett Scales, Sandra Scales, and Patricia Scales; six granddaughters, Tanja, Tamea, Kesha, Rachel, Nadjia, and Sydney; four grandsons, Stephen, Jr., Eian, Evan, and Gerald; and a host of nieces, nephews, other relatives, and friends.

Mrs. Annie Smoot Scales, 87, of Talladega, Alabama was born on February 14, 1934, to the late Elizabeth Chapman Smoot and the late Benjamin Smoot in Talladega, Alabama. She began her life early as a faithful follower of Christ when she accepted... View Obituary & Service Information

The family of Annie Scales created this Life Tributes page to make it easy to share your memories.

Mrs. Annie Smoot Scales, 87, of Talladega, Alabama was born on...

Send flowers to the Scales family.