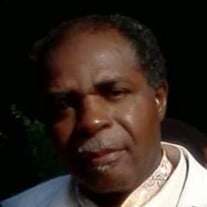 Alphonso Swain began his earthly journey on August 2, 1960, when he was born to the parentage of E.V. Swain, Sr. and Betty Caldwell Swain in Talladega, Alabama. At an early age, Alphonso, a beloved father and brother accepted Christ as his... View Obituary & Service Information

The family of Alphonso Swain created this Life Tributes page to make it easy to share your memories.

Alphonso Swain began his earthly journey on August 2, 1960, when...