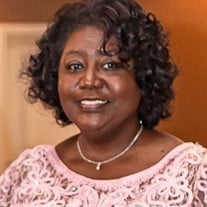 On September 24, 1960, in Talladega, Alabama, the late Mr. Harold Wallace and the late Mrs. Nellie Mae White Wallace became the proud parents of a beautiful bubbly baby girl who was given the name Alice Marie. Alice accepted Christ as her Lord and Savior at an early age and united with Greater Ebenezer Missionary Baptist Church where she remained a faithful member of several choirs, a Deaconess, Sunday School and Vacation Bible School teacher, she received her childhood and adolescent education in the Talladega City School System and was a graduate of Talladega High School Class of 1979. As Alice continued traveling this earthly journey, along the path she met and fell in love with her soulmate Mr. Reginald L. Scott and on October 4, 1989, the two became one when they were united in holy Matrimony, and to this blessed union three sons were birthed. Alice's husband, sons and grandchildren were her most prized possessions. She was very family oriented and always kept an infectious smile on her face that was contagious and would light up any room she entered. Alice, affectionately known as "Shugg", by her husband, Alice was a fun-loving and kind-hearted wife, mother, grandmother, sister, and aunt who was cherished immensely by her family and all who knew her. Alice loved caring for her family and being a devoted wife, mother and grandmother. She enjoyed couponing, crocheting, QVC shopping and collecting designer purses, but most of all, she enjoyed keeping her grandchildren and being with her soulmate and the love of her life, her husband Reginald of 32 years. Alice was a dedicated Teacher's Aide at Helen Keller before retiring after18 years of service. Mrs. Alice Marie Wallace Scott completed her sixty-one-year journey of exuberant life and selfless love on Tuesday afternoon, December 21, 2021. Upon accepting her Master's call, Alice gained her heavenly wings and was reunited with her beloved parents, Harold and Nellie Wallace and three brothers, Joseph Wallace, Anthony Wallace and James Wallace. Alice will be truly missed by all the lives she has touched and people she has encountered. The unexpected departure of Alice has left many broken hearts that only God can heal. Alice leaves to cherish and preserve her wonderful memories: a loving and devoted husband of 32 years, Mr. Reginald L. Scott; three sons, Mr. Quintorvius D. Scott of Talladega, Mr. Lamar (Shameca) Scott of Mapleton, Georgia and Mr. Stedman (Kayla) Scott of Talladega; two brothers, Mr. Harold Wallace, Jr. and Mr. Victor Wallace both of Talladega; four sisters, Ms. Sadie Wallace of Pittsburgh, Pennsylvania, Ms. Georgia Leonard of Talladega, Ms. Sandra (Daryl) Ragland of Buena Vista, Georgia and Ms. Rose Marie King of Birmingham, Alabama; five grandchildren, Jamese Blake, Ja'Kiyah (Poodie) Scott, Zaire (Ziggy) Scott, Johva (Junie) Scott and Dori Scott; mother-in-law, Ms. Viola Scott; special sister-in-law, Ms. Tosha Scott; of Talladega, four aunts; three uncles and a host of nieces, nephews, cousins, other relatives and friends. Mrs. Alice Marie Wallace Scott will always be remembered for her smile, love of family and others, sense of humor, loyalty, and genuinely kind heart.

On September 24, 1960, in Talladega, Alabama, the late Mr. Harold Wallace and the late Mrs. Nellie Mae White Wallace became the proud parents of a beautiful bubbly baby girl who was given the name Alice Marie. Alice accepted Christ as her... View Obituary & Service Information

The family of Mrs. Alice Marie Scott created this Life Tributes page to make it easy to share your memories.

Send flowers to the Scott family.