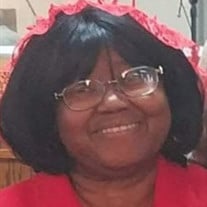 Alberta Besteder Jackson was born on July 28, 1951, in Demopolis, Alabama, to the late George and Lillie Besteder Sr. She was one of six children. She was educated in the Bessemer City School System and graduated from J. S. Abrams High School in 1969. She later graduated from A. G. Gaston Business College in 1972 earning an associate degree in Business. Alberta was employed at Loveman's retail store for several years before becoming employed at Am South Bank in 1976 which later became Regions Bank as an operations specialist III supervisor. She retired from Regions Bank after 35 years of dedicated service in 2011. Alberta was well known for her passion for cooking and her culinary skills. If you wanted down home southern cooking, her home was the place to come. Her kitchen was always open to serve you a meal. She loved to have fun and she was always a source for good jokes and plain old common sense knowledge. Alberta was known for her passion to shop. She also loved to drop those one line action statements that made you laugh and think about what she had just said. Alberta had a calm spirit and the wisdom she shared will always be treasured. Alberta was preceded in death by her Father and Mother and her two brothers, Ernest Rembert and George Besteder, Jr. She transitioned from this life on Saturday, December 18th at 5:45 am surrounded by her loving husband and children. Alberta confessed her love for Jesus Christ and declared Him as her Lord and Savior, receiving the gift of the Holy Ghost at Refuge Church of Our Lord Jesus Christ in Talladega. She traveled from Bessemer to Talladega every Sunday faithfully for years. Alberta was the Mother of the Church and provided guidance and leadership where needed. She served as a Missionary at the church as well as the Financial Assistant for the church. She served faithfully as the First Lady of the Church. She coordinated and planned all of the many programs and events for the church. Alberta met and fell in love with the love of her life Pastor James E. Jackson and together they became one as they were united in Holy Matrimony on November 16th, 1985. God smiled upon this union and blessed them and together they raised four beautiful children. Alberta leaves to cherish and preserve her wonderful memories, a loving and devoted husband, Pastor James E. Jackson; four children, Cynthia (Terrance) Perry, (Virginia), James Jackson, (Anniston), Katrice Jackson (Birmingham), Jamal Jackson (Tuscaloosa); five sisters, Dorothy Cabbil (Bessemer); Brenda Lacey (Birmingham), Joyce Besteder (Bessemer), Kathleen Little (Bessemer), Jessie (Bob) L. Scott (Newark, New Jersey); four grandchildren: Amya and Alexis Perry (Virginia), Jacory and Jacob Jackson (Anniston); two brother in laws, Samuel (Ollie)Jackson, (Birmingham), Johnny (Annette) Jackson, (Talladega), one sister-in-law, Patricia Besteder (Bessemer); one uncle, Nathaniel Rembert (Fairfield); one aunt, Sandra Rembert (Bessemer); a host of nieces, nephews, other relatives and friends.

Alberta Besteder Jackson was born on July 28, 1951, in Demopolis, Alabama, to the late George and Lillie Besteder Sr. She was one of six children. She was educated in the Bessemer City School System and graduated from J. S. Abrams High School... View Obituary & Service Information

The family of Mrs Alberta Besteder Jackson created this Life Tributes page to make it easy to share your memories.