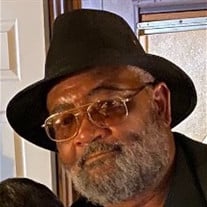 Mr. Albert Nixon was born on August 7, 1951 to the parentage of Houston Green and Ollie Cunningham Nixon in Talladega, Alabama. At an early age, Albert accepted Christ as his Lord and Savior and united with Rushing Springs Baptist Church. He received his childhood education in the Talladega County School system and was a 1970 graduate of Lincoln High School. He was a star basketball player for the Lincoln Golden Bears and received a basketball scholarship because of his great performance on the basketball court. He always thought he was the man when it came to basketball and no one could outshoot him or beat him at the game. After completing his education, Albert became a contractor in the construction industry until his health began to fail. Albert was affectionately known to many as "20" and to himself he always made it known and very well-defined that he was "LEGEND". You would often hear him say "I AM A LEGEND" or "I AM LEGEND". He inherited the nickname "20" from doing what was one of his favorite hobbies, which was traveling up and down I-20. Albert loved to travel, and he stayed traveling up and down I-20 from Boston, Massachusetts to Chicago, Illinois, to Cincinnati, Ohio and back to Alabama. Aside from traveling, Albert had a passion for music, basketball, and his family. He was definitely the life of the party and loved entertainment and entertaining. Albert will truly be missed by all the hearts and lives he encountered. Unexpectedly on Thursday morning, March 25, 2021, Albert peacefully answered the Master's call and accepted his heavenly wings transitioning from this earthly home to his new eternal home joining his wife of 30 years, Annie Nixon, parents, Houston Green and Ollie Nixon, son, Bryant Strown, brothers, Milton J. Nixon and Willie Fred Fomby, sister, Delores Nixon, and grandson, Devin McCauley. Albert leaves all his beautiful and fun-loving memories to forever be cherished by his three daughters, Felicia (Phillip, Sr.) Tyler, Marsha (Louis) Glover Orr, and Juakita (Blake) Caldwell; three sisters, Clara Embry, Millie Glover, and Bernell Fomby; three stepsisters, Connie Knox, Donnie Davis, and Bonnie Goggins; six grandchildren; Dwayne McCauley, Jr., Denee McCauley, Shakayla Tyler, Phillip Tyler, Jr., Kei'Shaunna Strown, and Iye'Aunna Strown; great-grandaughter, Jayla Marie McCauley; a special son, Christopher White; and a host of other relatives and friends.

Mr. Albert Nixon was born on August 7, 1951 to the parentage of Houston Green and Ollie Cunningham Nixon in Talladega, Alabama. At an early age, Albert accepted Christ as his Lord and Savior and united with Rushing Springs Baptist Church.... View Obituary & Service Information

The family of Albert Nixon created this Life Tributes page to make it easy to share your memories.

Send flowers to the Nixon family.