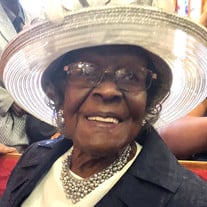 Ada Mae Duncan Twymon "Ma Dea" was born December 21, 1924, to the union of the late William Henry and Nathaniel Merritt Duncan in Talladega County, Alabama. Mrs. Ada Mae Twymon's 96-year life's journey has truly been a blessing to everyone she has encountered beginning with her youth. She was definitely the Webster's Dictionary definition of a mother, grandmother, great-grandmother, great-great grandmother, sister, aunt, cousin, and friend. In her youth, Mrs. Twymon accepted Jesus Christ as her Lord and Savior and united with Africa Missionary Baptist Church where she remained a faithful member and servant of God. At the time of her demise, Mrs. Ada Mae Twymon was the oldest surviving mother of the church. She attended Mt. Zion School in Talladega County. Ada Mae fell in love with her soulmate, Mr. Eunice Twymon. They were united in holy matrimony soon after, and to this union they were blessed with three beautiful children. She soon began her working career as a seamstress at Palm Beach in Brecon, but it did not take long for her to realize that family was her priority. She became a domestic engineer and cared for her family and was well-known as "Ma Dea," a pillar in her community. Mrs. Twymon was a fun loving, kind-hearted, energetic person who loved gardening, sewing, cooking, and feeding others. She loved cooking for her family and friends, and nothing interfered with her spending time with her blessed generations of LOVE. She was affectionately known as "Ma Dea" to all and as a Mother in her community. On the morning of Friday, June 18, 2021, after God had graciously blessed and given Mrs. Ada Mae "Ma Dea" Twymon to us for ninety-six years, she accepted her new heavenly wings and flew to her new eternal home. Until her demise, Mrs. Twymon's was blessed to live and see five generations of her family including being the mother of three, grandmother of five, great-grandmother of twelve, and great-great grandmother of eleven. Leaving behind to cherish the many years of Ada Mae "Ma Dea" Twymon loving memories are her three children, Ms. Sara Ann Twymon Garrett and Mr. James Bennett (Laura) Twymon of Talladega; Mr. Lynn Wayne (Kimberly) of Birmingham, Alabama; a grandson that she raised as her own, Mr. Melvin Twymon (Conthia) Wilson of Alpine, Alabama; five grandchildren, twelve great grandchildren, eleven great-great grandchildren, and a host of nieces, nephews, cousins, other relatives, and other friends near and far. Although a pillar of the community has gone before us, Mrs. Ada Mae "Ma Dea" Twymon left a legacy, and she will truly be missed but remembered by all of the lives she has touched. REST ON "MA DEA"

The family of Ada Mae Twymon created this Life Tributes page to make it easy to share your memories.

Send flowers to the Twymon family.