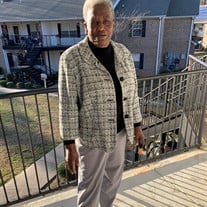 Ada V. Fomby Kidd was born New Year's Day in 1941 to the parentage of the late Clara Jordan Fomby and the late Samuel Garrett in Talladega County, Alabama. At a young age, Ms. Ada V. confessed Christ and joined Mt. Zion Missionary Baptist Church in Cropwell, Alabama where she remained a longtime faithful member until she began worshipping with Jacob Chapel CME Church in Pell City. She received her formal education in the Talladega County School System. Ms. Kidd worked various positions at Goldkist Poultry Plant in Trussville, Alabama for over 40 years before retiring about the year 2000. For many years Ms. Ada V. had her own passenger van that was used to transport van riders/employees to the Goldkist Poultry Plant in Trussville. Ms. Ada V. was a very kind-hearted loving woman who opened her home to anyone. She was a mother to nieces, nephews, grands, great-grands, and great-great grandchildren, cousins, and friends. Ms. Kidd's hospitality went beyond measures when it came to helping others. Having a great interest in cooking, she was a dynamic cook and well-known for her "signature dressing". She would cook for the community and fed any and everybody and always provided meals to those who just stopped by to visit. She enjoyed going to bingo, playing cards, playing the slots at the casino, watching the news, and her favorite game show Wheel of Fortune. When it came to football, you can bet she was cheering on her Alabama Roll Tide football team. Ms. Ada V. was particular about her yard, so she would cut the grass until her health no longer permitted her to do so. On the evening of Friday, January 28, 2022 while under the care of Compassus Hospice surrounded by love one in the comfort of her home God saw Ms. Ada V. was getting tired and said take your rest. Ms. Kidd was preceded in death by her son, Milton Fomby, sister, Solonia Jordan and a special niece, Myrtis Moss. Left to cherish Ms. Ada V.'s memories are her daughter-in-law, Darlene Oden Fomby; ten loving grandchildren; Inger (Ronald) Moten of Talladega, Alabama, Shonda Fomby, Takila (Kerry) Warren, Ivi McDaniel, R'Shae (Brian) Keller all of Pell City, Alabama, and Malaa McDaniel of Birmingham, Alabama, Henry (Barbara) Fomby of Talladega, Alabama, Allen Fomby, Mandral Swain, and Victor Bedford all of Pell City, Alabama; 22 great-grandchildren; nine great-great grandchildren; Goddaughter, Gwendy (Tony) Oden; brother, Frank Fomby of Pell City, Alabama; sister, Dorothy Richardson of Detroit, Michigan; very special friends, Joann Posey and Johnnie Mae Green; very special cousins, Gertrude Pointer Zachery, Elizabeth Garrett and Joan Ford; and a host of nieces, nephews, cousins, and friends.

The family of Ms. Ada V Kidd created this Life Tributes page to make it easy to share your memories.

Send flowers to the Kidd family.